We all know Amazon Web Services frequently changes and updates their products and services. This post was originally written when all of the tutorials online for deploying Django to Elastic Beanstalk with PostgreSQL were outdated (using Python 2.7 and Django 1.7). There are a few things that are different when deploying Python 3 to EB that weren’t widely known at the time. This tutorial is designed to help you easily deploy your web app. I’ve borrowed a few general ideas from here for this tutorial. As always, you can always check out the official documentation for the most up to date information.

I did this on a Mac running macOS Sierra 10.12.5. It should be the same on Linux. Sorry Windows users, you’ll have to adapt this tutorial to your needs, but I imagine it’d be very similar once you get your Python environment set up. In this tutorial, I expect that you already have an Amazon Web Services account and are familiar with its basic functionality.

The local environment I used:

This covers basics of creating a virtual environment and creating a Django app. If you have already done this, you can skip this part.

Note: To deactivate your virtualenv just type deactivate at your command prompt.

Install your dependencies with pip. We’ll definitely need psycopg2. If you have any other pip dependencies. Install them now. We’ll also create a new homepage app.

Create your Django site and add an app:

Add the homepage app to the list of INSTALLED_APPS in your settings.py file. Migrate your database and run the server to make sure everything is working.

Git is required to deploy your web app to Elastic Beanstalk. If you haven’t already created a Git repository in your root Django project folder, do so with the following commands (make sure that you are in your project’s root directory!):

3. Getting ready for Elastic Beanstalk

You’ll need to install one more thing with pip in order to deploy your site to Elastic Beanstalk:

This will install awsebcli and a host of dependencies. The package awsebcli, or EB Command Line Interface (CLI), is a tool that helps you deploy and manage your AWS Elastic Beanstalk applications and environments. It also provides integration with Git. You can view more info here. This package is currently at version 3.10.1 as of this writing.

You can check to make sure it’s working by running eb --version. You should get:

4. Setting up your Elastic Beanstalk Environment

Now that we’ve got the EB CLI installed, we can proceed. Let’s start by initializing our EB environment with the following command:

Note: If you’ve already setup your AWS CLI and have a specific profile to use, you can use it with the --profile flag.

For example, if I wanted to use a profile called my-eb-user I would do the following:

This will bring up a menu enabling you to select which AWS data center you want your web app to be stored in.

I chose option 3, US Oregon region.

If you haven’t set up the AWS CLI, the next prompt will ask you to put in your Amazon Access ID and Security Key for your account or IAM user.

Let’s create a user specifically for our Elastic Beanstalk deployment. Visit the AWS IAM website here. On the sidebar, click Users. Hit the Add User button. Enter a name for the user and check Programmatic Access and hit Next. 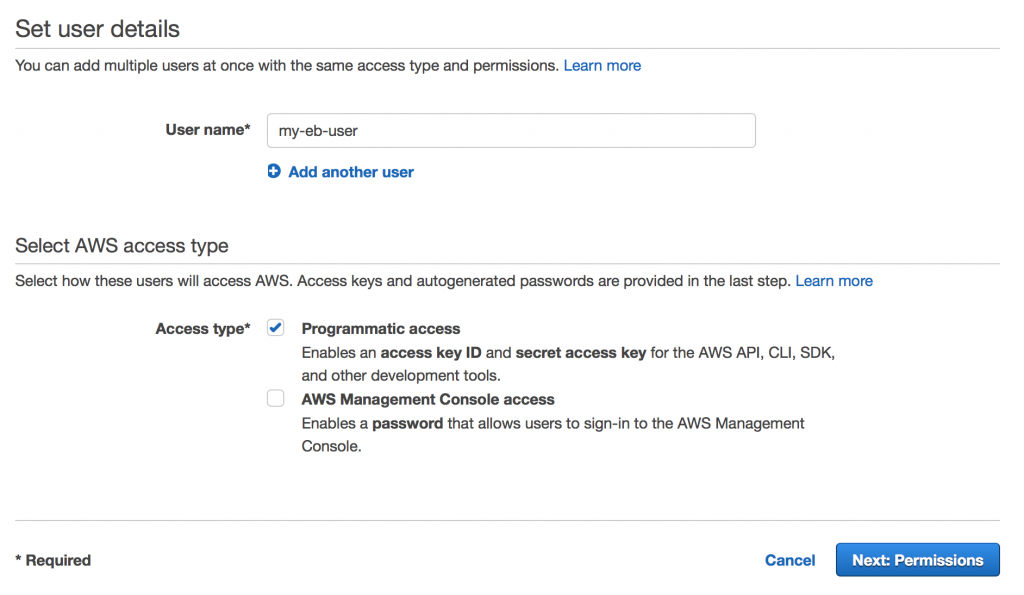 For purposes of this exercise, give the user AmazonEC2FullAccess, AmazonS3FullAccess, and AWSElasticBeanstalkFullAccess. You’ll want to refine these permissions for a production environment. 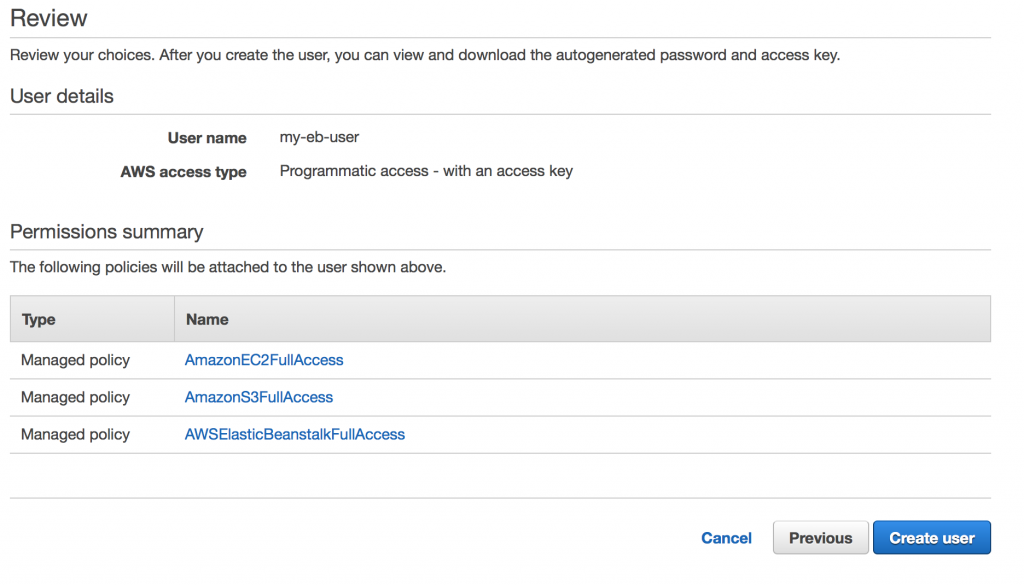 When you finish creating the user, make sure you download the CSV with your Access Keys! Once you hit close, you will no longer be able to access the secret key and there is no way to recover it. Make sure you keep your keys safe. Anyone with these keys can access resources in your AWS account.

The next part of the script asks you for an Application Name (will be auto-populated if you leave it blank), asks you if you’re using Python, and then asks which version of Python you want to use. Since I’m using Python 3, I will choose option 1 (If you’re using a version of Python newer than 3.4, you should be okay as long as you don’t use any syntax that’s specific to 3.5+ in your web app).

Next, you’ll be asked if you want to use AWS CodeCommit. We aren’t using CodeCommit so let’s say no.

You will then be asked if you want to enable SSH. In my case, I’d like to have SSH for troubleshooting reasons.

After this, we are almost ready to have the EB CLI deploy our code. There are still a couple more configuration items that we need to address.

Now before we use eb to create our instance in the cloud, we need to make some additional configuration settings.

First, we need to "freeze" our packages installed with pip into a requirements file so our Elastic Beanstalk instance will automatically install them. This is done with:

Let's start by putting the following in our configuration file:

You'll need to adjust where it says "my_eb_site" to whatever you named your Django project.

In addition to this, we'll need to make sure we have Elastic Beanstalk install the PostgreSQL development libraries on our EC2 instance. If we don't do this, we'll get an error when we deploy our Django site to EB because it won't be able to install psycopg2. So add the following:

We're almost ready to go! We need to change a couple more settings in our Django project in order for us to get this instance created.

Since we want to create an RDS instance with an EC2 instance on Elastic Beanstalk, we need to put the RDS database settings into our settings.py file. Luckily, EB has some global python variables that we can put into our settings that make it pretty easy. We'll put this code in an if-else statement so our database environment will still work on our development machine. Feel free to adjust your local environment to the required settings.

We'll also want to make sure our models files migrate when we start our instance. In order to do this we'll need to add another few lines to our .ebextensions/python.config file.

While we're at it, we probably want to collect our static files for our Django project. You'll add this underneath the container_commands.

We'll need to add a STATIC_ROOT variable to our settings.py file as well. You can add this near the STATIC_URL variable.

The STATIC_ROOT variable tells Django to place static files in our app's directory under www/static. We reference this in the python.config by adding the StaticFiles: "/static/=www/static/" line. This line tells Elastic Beanstalk to create an alias in the Apache configuration to map the /static URL to our app's directory/www/static.

So our full .ebextensions/python.config should look like this now:

Let's make sure to commit all these changes so that we can deploy them to our instance:

Now that we've gotten everything ready, let's deploy our instance! This can be done with the eb create command.

This command has default settings of auto scaling and no database. The auto scaling group defaults to 1 instance with a max of 4. If you don't want to scale out, you can adjust your application settings on the Elastic Beanstalk main page, or we can add --scale 1 flags to our create command. This tells EB that we only want 1 instance of our web app regardless of load. This also means that if our instance goes down, the ASG will automatically start another instance. Alternatively, we can specify --single to ensure we only have a single EC2 instance for our Elastic Beanstalk app that doesn't spin up anything else once that instance dies.

So what if we want a database? According to the eb create documentation, we can add the -db flag to our create command. However, this defaults to the MySQL database engine. But we want PostgreSQL! So how do we do this? We add another flag, -db.engine postgres to our command. We can also specify our instance size with -db.i <instance type>. I will use db.t2.micro (you will get an error if you use any instance smaller than this for Postgres in RDS). So our full command to create the instance would be:

When you run this command you'll get a couple prompts asking you to name your environment and choose a CNAME record for your subdomain at elasticbeanstalk.com. If the CNAME is taken, you'll be asked to choose a different one.

If you've chosen --scale rather than --single, you'll be prompted for a load balancer type:

I won't go into details about the differences between classic and application load balancers in this article, but you can read more about them here. For let's go with the default option (classic load balancer).

The next prompt that shows up is for database creation. You'll choose a root database user and password.

After this, the EB CLI will upload your latest Git commit to Amazon S3 and create EC2 and RDS instances. The EB CLI will output the following:

It will take anywhere from 10-20 minutes for Elastic Beanstalk to fully create the necessary instances and start the web app. If you prefer to do other things with your terminal during this time, feel free to hit Ctrl+C once you see that it's safe to do so. EB will continue deployment in the cloud. You can view it's progress by visiting your app's profile page. This can be found by going to the Elastic Beanstalk main page. After clicking on your app, you'll see something similar to this:

If you watch the progress, you'll see that EB will create an S3 bucket and upload your code, create an auto scaling group, create an RDS instance, and create an EC2 instance. This process can take quite a while. Once your app has been fully provisioned, you should be able to go to your site URL on elasticbeanstalk.com and see your site. You can find this on your app's status page. Mine is my-eb-site-dev.us-west-2.elasticbeanstalk.com. Here's what my website shows:

That's not what we expected, right? This is a Django specific error that we'll learn how to fix this in the next section.

9. Making Changes and pushing them to Elastic Beanstalk

Each time you make changes to your code, you'll need to commit those changes with git. If changes are not committed, they won't be pushed to Elastic Beanstalk.

To fix the problem we ran into in the section above, we need to add our domain name to the list of ALLOWED_HOSTS and re-deploy the code. Add

Commit the changes with Git:

To deploy changes to your live web app, run the following command:

After a couple minutes, our changes should be shown on our live site URL. Thankfully deploying code is much faster than provisioning the whole infrastructure again!

When we deploy our web app, our database is empty. What if our app has login capabilities? How are we supposed to login if we don't have any users? We can't use Django Admin's default createsuperuser command because it requires input in order to specify a password. This can be resolved by adding a create super user command to our Django app. To do this, we'll need to write custom django-admin commands. I'm assuming that you've kept the Django admin app enabled from when we created the Django app.

As always, adjust this according to your needs.

You'll also need to make sure you add the appropriate init.py files as well. I just created blank files for these using the touch command. Here's where these __init__.py files go:

The next thing you'll need to do is edit your .ebextensions/python.config file and add the following lines underneath your container_commands section.

Your .ebextensions/python.config should now contain the following:

Commit these changes and deploy them and you should be good to go!

Try logging into your Django admin page by going to your Elastic Beanstalk URL/admin (For example: http://my-eb-site-dev.us-west-2.elasticbeanstalk.com/admin/).